The Trays Festival is held every four years in early July. It has origins in the Cult of the Holy Spirit, which began in the 16th century, but we can see in it traces of earlier harvest festivals, such as in the profusion of flowers and the fact that bread and ears of wheat are present on the trays.
The Procession, which is the high point of the festivities, takes place alongside a wealth of cultural and recreational events, the most important of which are the Boy’s Procession, the “Mordomos’s” Procession, the decorating of the popular streets, the popular games, the Partial Processions, the popular parties and the “Pêza”.
The Festival starts on Easter Sunday when the Crowns and Standards representing all the parishes are brought out in a processionenlivened by pipers, drummers, firework launchers and bands. From this point on, this is repeated seven times but with the Crowns and Standards of the town and just a few on the parishes each time. As children are not allowed to take part in the big procession, the Boy’s procession was created so that the children could have their own festival. The Boy’s procession is an exact copy of the adults one but it in held on the previous Sunday. Children from Nursery and Primary school take part.
Festa 2On the Friday before the Main Procession there is the “Mordomo’s” Procession, simbolising the entrance into the town of the sacrificial oxen, which, in the past, would have been slaughtered, and the meat distributed to the poor. In the past this procession was called the Procession of the Holy Spirit; today it is an impressive procession of carts and people on horseback with pairs of oxen at the head.
The streets of the historic centre are closed to traffic and decorated with millions of hand made paper flowers, which represent months of intense but enthusiastic work.
On the morning of the Saturday before the Main Procession, the Partial Processions come from the parishes; hundreds of Trays that will be paraded the next day. That afternoon, the traditional popular games are held in the Municipal Stadium (races with jars and barrels, tugs of war, climbing the greasy pole, quoits).
On the Sunday, the Procession of Trays starts with the pipers and drummers. Next come the Standard of the Holy Spirit and the three Crowns of the Emperors and Kings. After that come the Standards and Crowns of all the parishes.
The Procession is an immense weaving train of colour and music, made up for hundreds of pairs: the girls in white, with a broad ribbon tied across their front, carrying the tray on their heads; the boys in white shirts with sleesves rolled up, black trousers, a berent on their shoulder and a tie that matches the colour of the girl’s ribbon.
The triumphal carts of breads, meat and wine, pulled by the symbolic sacrificial oxen, bring up the rear of the procession.
The Trays the symbol and main decorative feature of the Festival of Trays. It should be the same height as the girl who carries it. It is decorated with paper flowers, greenery and ears of wheat. It also made up with 30 bread rools of a special size, each wighing 400 grams, threaded onto 5 or 6 canes. The later emerge from a wicker basket, wich is wrapped in a white embroidered cloth, and on top it isfinished off with Cross of Christ or a Dove of the Holy Spirit, the girl’s outfit consists of a long, white dress with a coloured ribbon across the front; the boy’s one is a simple, white shirt with sleeves rolled up, dark trousers, black beret on the shoulder and a tie the same colour as the girl’s ribbon.
On the Monday afterv the Procession, to round off the Festival, tradition and solidarity demand that meat, bread and wine that were blessed the previous day – the “Pêza” – should be distributed to the needy. 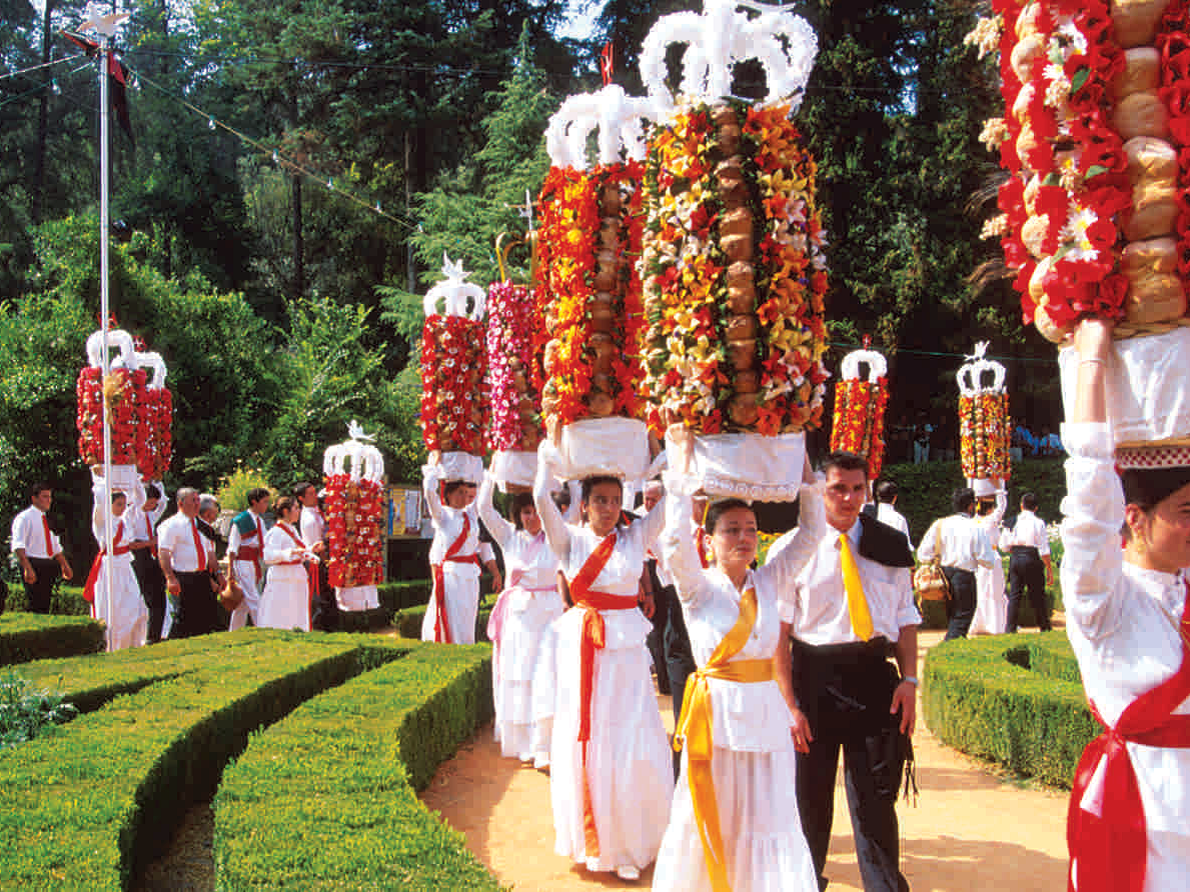 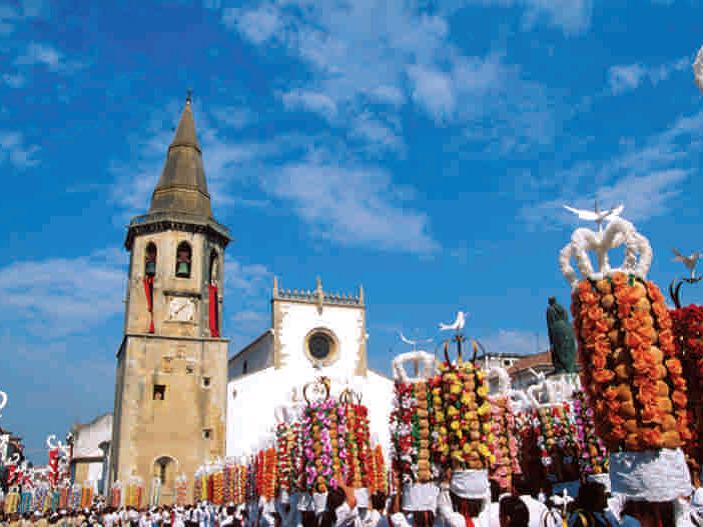